January 15, 2016 – An emerging player in the US mobile space is quietly expanding its user base by tailoring its services to the Chinese population.

First Chinese mobile virtual-network operator in the US.

China Telecom Global launched CTExcel – its US mobile service – in May, making the telecommunications giant the first Chinese mobile virtual-network operator in the US.

“After several months of work, we have established the foundation,” said Feng Sun, director of mobile business for China Telecom Americas, based in Herndon, Virginia. “The growth rate is speeding up, and we are expecting a boom this year.”

Marketed as “Customized for Chinese”, CTExcel offers four packages to US-based customers. For $45 a month, a user not only can make unlimited domestic calls but also unlimited calls and texts to China. The package also includes three gigabits of 4G LTE data.

The economical rate is achieved by the technology of dual number, explained Sun. When buying a CTExcel SIM card in the US, a user also will be assigned a Chinese virtual number for calls forwarding between China and US.

“It also enables your family and friends in China to call you without worrying about the international fee because they are calling a Chinese number,” Sun told China Daily. “This is our distinctive advantage compared to the American service providers. We have access to the Chinese numbers. They do not.”

Soon the service will also work the other way around. When a US-based user goes to China, he or she will be able to get a Chinese SIM card that has the original US number assigned to it.

“When someone calls your American phone, you can pick up with your Chinese SIM card in China,” he said. “The callers won’t be able to know that you are actually in China.” 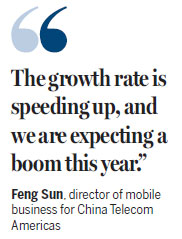 Sun said that China Telecom Americas has paired with student organizations at more than 100 US colleges. Starting with freshmen, the company hopes to gradually convert all Chinese students to China Telecom.

For 2016, he said the primary goal is to expand in the Chinese-American community and appeal to Chinese tourists.

“We have customer service in both Chinese and English,” he said. “This greatly helps travelers and immigrants who don’t speak English.”

CTExcel services can now be purchased at a dozen of telecommunications retail stores in the San Francisco Bay Area, and by the end of January, they will expand to more than 20 vendors, Sun said.

China Telecom Global had a booth at this year’s CES 2016 in Las Vegas, where about 1,000 Chinese exhibitors flew in from China for the consumer electronics event.

For $28, a Chinese traveler can make unlimited calls in the US and to China for 14 days, along with unlimited international texts and 1 gigabit of 4G LTE data.

“We told [the Chinese attendees] about our packages, and they were excited,” Sun said. “They blamed us for not telling them earlier, because some of them have already bought expensive packages from American providers. Next year, we will do a better job. They will all be able to get the service before getting here.”